As a gun owner and writer I’ve always emphasized two things: guns are more fun if you actually shoot them and every gun owner should train regularly. This past October I combined those two ideas by taking a five day intermediate pistol class at Gunsite Academy in Paulden AZ. and staying for the GAS match on day six.

The Gunsite Alumni Shoot (GAS) match is held in the fall each year and is open to anyone that has been a student at Gunsite. Gas is described by Gunsite as “a social event only slightly interrupted by gunfire”. I’ve attended the last two GAS matches and next year’s match is already on my calendar.

Gunsite CEO Ken Campbell often speaks in terms of “the Gunsite family” and that really is accurate. Once you’ve taken a class or two at Gunsite it really does feel like you’re returning to family. The flavor of Gunsite can be seen here. For Californians longing for a taste of Free America the Gunsite experience provides that as well.

The GAS match is a full day experience beginning with a 6:00 am registration and continuing through the dinner and awards ceremony which begins at 6:00 pm. The match commences at 8:00 am with a full honor guard, national anthem, and pledge of allegiance.

You’ll see no kneeling or other signs of disrespect here. 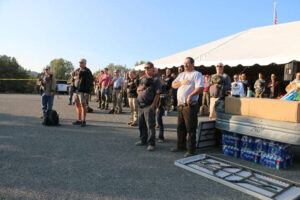 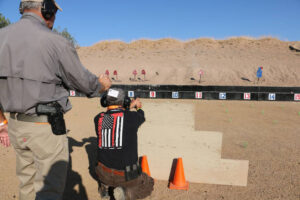 Participants are free to shoot the stages in any order and can shoot any of the side or specialty matches they like. Transportation is provided between the stages. Several of the side matches feature valuable prizes for the high score. 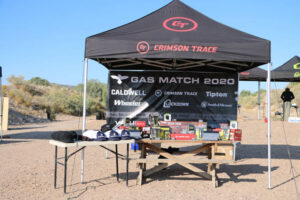 The Cooper Cup is one of the specialty matches that will challenge even the most experienced shooter. It begins with a one second head shot from the holster at three yards and continues with varying times and increasing distance. Other side matches provide the opportunity to shoot pistols, rifles, or shotguns for prizes. There is even the opportunity to run a shoot house if you so choose.

Over thirty industry sponsors provide prizes and swag for the participants. The prize table is enormous, and every shooter will have an opportunity to leave with something. Shooters are called to the prize table in the order of their match score. The event also includes live and silent auctions of Gunsite and Cooper family memorabilia. A fellow classmate was able to get Colonel Cooper’s personal spotting scope for a $200 bid.

After the match we have the dinner and awards ceremony. One of the highlights is the flag folding ceremony. 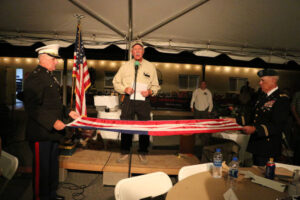 Two retired veterans in full dress uniform perform the ceremony. A senior Gunsite instructor explains the meaning of each of the 13 folds during the ceremony. The folded flag is then placed at a dinner table that is set in honor of fallen veterans. It’s a very moving ceremony. 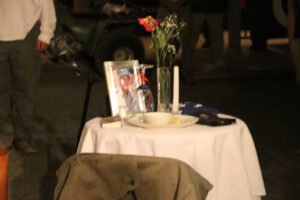 The Gunsite experience is something I highly recommend. The Gunsite instructors are world class and in Col. Cooper’s words “have seen the elephant” meaning they’ve actually used firearms in lethal force situations. Once you are a member of the Gunsite alumni you should definitely make the GAS match one of your annual events. The full gallery of GAS 2020 photos can be seen here.